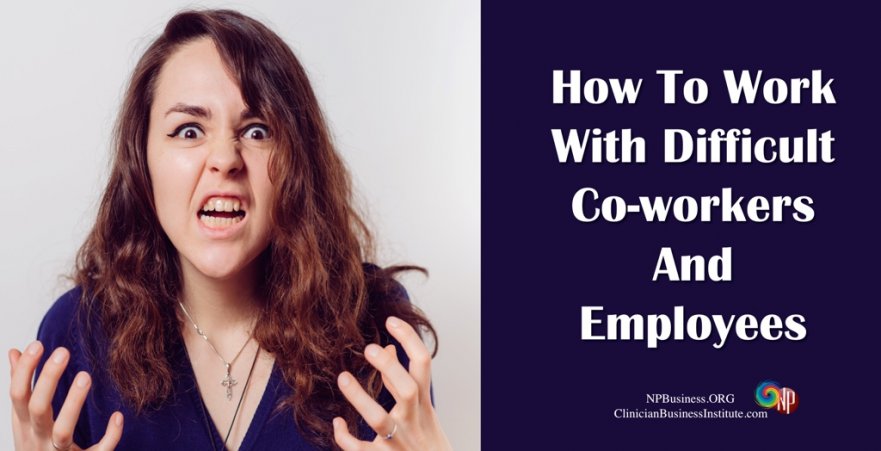 Last week I talked about the challenge of working with difficult patients. We’ve all dealt with them. You’ve encountered them, and I’ve come across my share too.

It’s challenging and draining when you have to work with someone despite ongoing disagreements or even fundamental differences.

And no, I’m not talking about the occasional disagreement or irritation that just happens between people.

What I’m talking about is working with folks who don’t pull their weight, put you down whenever there’s a chance, or boss around everybody they meet.

Thinking over my years of working in corporate and then healthcare, I’ve identified three groups of difficult people. They are the lazy slacker, the passive-aggressive, and the open, aggressive bully.

I know there are more categories than that. However, these three capture the most commonly found difficult behavior types in the workplace.

So first, let’s take a look at how these people behave. And second, let’s find out how you can best deal and work with them.

This person avoids taking any initiative, never mind going the extra mile to get the job done. If anything, they are more than happy to step aside to let you do the work. And I mean all the work.

These people may come to work right on time and leave right on the dot. But here is the thing that gives the lazy slacker away.

The “Lazy Slacker” does as little work as he or she can get away with, and not an ounce more. And it doesn’t matter if everybody around them pitches in to get a job done or to help each other out.

How do you deal with the “Lazy Slacker?”

You don’t step in and do their work for them; even though you may be tempted to help and pitch in! But this is the worst thing you can do.

It’s what the “Lazy Slacker’ expects and is accustomed to. Stick to your guns. Tactfully let them know what you job is and what it is not.

It’s tough when one of your co-workers is a “Lazy Slacker.” But don’t give into temptation; don’t do their work for them. Because if you do, no one will catch on and see that the “Lazy Slacker” is not doing their job.

If you’re the employer and realize you have a “Lazy-Slacker” on your hands, here’s what to do. Don’t let them get away with slacking for very long, but talk with them the minute you’ve identified the problem.

Review their job description with them. Explain in no uncertain terms what you expect. Then watch them closely.

If their job performance improves, great; but if the problem continues, don’t wait too long to take corrective action.

Always provide someone with ample opportunity to change, but don’t be afraid to replace them if they are not doing their part.

This person feels superior to the people around them, including you. Of course, they would never come out and just say so. Oh no.

They have their “silent code” to let you know how they feel about you. It’s a strategically executed stare, a snicker, a certain look, and of course silence. All to let you know that they are superior to you, that you don’t make the cut.

If you’ve ever worked with anyone like it, you know just how frustrating it can be. These people are willing to let a project flop just to see you flop. This, of course, proves that they are far superior to you.

How do you deal with the “Passive-Aggressive?”

When you find yourself working with someone like this, don’t get too frustrated.

You may choose to ignore some of their behavior. Alternatively, you may confront them (nicely) about their negative behavior. But chances are they’ll deny doing anything.

By doing this, you’ve just let them know that you’re aware and prepared to stand up for yourself. Often that’s all you need to do to see a change in behavior (at least for a little while).

Of course, if this doesn’t work you’ll have to go the official route. Get help from a supervisor or get the clinic owner involved to resolve any issues. The sooner you address any problems, the better.

If you’re the boss and have an employee with this type of behavior, put a stop to it as soon as possible. If left unchecked and unattended, they can undermine your authority and cause friction in the office.

Talk with that person at once to let them know you won’t stand for this type of behavior. Make sure to follow through on what you say.

This person doesn’t hide anything. They’ll let you and anyone else know if they don’t like or think much of you.

They tend to be abrasive, confrontational, and hard to deal with. And they don’t care what you think about them.

These people can ruin any day and any project. Whether they’ve contributed anything themselves or not, they barge in with criticism and accusations.

They have mostly negative things to say about the people around them and think they’ve come to save the day.

It’s tough to be around someone like that. But since you are working with them, you have to deal with them.

How do you deal with the “Aggressive Bully?”

Don’t be intimidated and don’t be afraid to speak your mind.

Stand your ground and don’t let them walk all over you. Set limits to what is acceptable and stick to your guns.

To deal effectively with an aggressive bully, you may have to confront them about their behavior. Alternatively, you may need to get help from a co-worker or supervisor to find a resolution to the problem.

If your employee is the aggressive bully, don’t wait too long, address the problem at once. While this person may not be rude to you, they most certainly could be rude to patients and other employees.

Every difficult situation is unique and therefore needs its individual approach.

There are some general guidelines though you can choose to follow. Utilizing them will make it easier for you to work with difficult co-workers or employees.

Overall, difficult people become more difficult when they feel threatened and not understood. So understand that how you interact with them is key to them behaving at their best and their worst.

I know, it’s crazy to think you should have to adjust your communication style when dealing with someone difficult. But it may be just what brings out the best in them.

In general, there is less conflict and more cooperation when people feel they are on the same page. Unfortunately, this is rarely the case in the workplace. Often people have their own ideas about what needs to get done and how it should get done.

But there is a simple communications technique you can purposefully deploy and use. This technique is called blending where you mirror the other person’s volume and speed when talking.

Chances are you already do this automatically with people you like and trust. You can do the same when dealing with difficult co-workers and employees. It will make them easier to work with because they’ll feel more comfortable.

Why does this work? It works because all of us want to know that the other person is listening and understands what we’re saying.

Here is what you can do specifically to let others know you are listening to them:

This process is very deliberate and focused on the other person. It dramatically increases your chances of getting cooperation from the difficult employee or co-worker.

Working with difficult co-workers or employees is… difficult!

However, you can make it easier on yourself by changing how you think about the difficult person.

Understand their deep need to be heard and understood. Then use the above strategies to change the way you interact with them every day.

As always, we’d love to hear from you. So don’t be shy; let us know what you think.

By Johanna Hofmann, MBA, a regular contributor to the NPBusiness blog and author of “Smart Business Planning for Clinicians.”