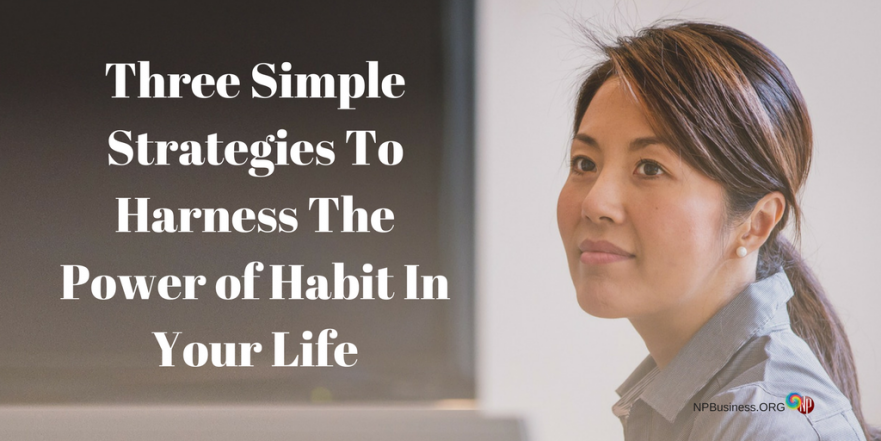 Humans are creatures of habit!

Granted, some people behave more habitually than others. But while we don’t like to think of ourselves as habitual creatures, truth is we are.

And it doesn’t matter if the habits you’ve adopted work for or against you. Once you’ve “installed” them, to some degree, they run, control, and perhaps even define your life.

So what if you realize you have some habits that no longer work for you?

You’re not stuck with any one habit. If you don’t like a certain habit, you can change it or replace it with a more appropriate one.

What Is A Habit?

A quick search on Google using the term “what is a habit” brings up the following entries:

Habits Are Not All Bad

While the term “habit’ tends to have a negative ring, habits aren’t all bad. As a matter of fact, there is real value to habit and routine (a set of habits) in our lives.

Without habit or routine life would be overwhelming and difficult to manage. Habits reduce the hundreds or even thousands of choices we have to make every single day.

Just think how challenging your life would be if every single morning you’d have to re-think, re-learn how to:

Thankfully, most of us can develop habits that help us deal with many tasks in life. And once the habit gets created, it gets used over and over again.

But Here’s The Problem…

The trouble is this. Some habits serve us, and some do not.

While some habits may have worked perfectly for you in the past, they no longer serve you and may hurt you now.

Let’s assume that years ago, while in graduate school, you stayed up late each night to study. The only time you had to study was a couple of hours late in the evening, before going to bed. The house was quiet; the kids were in bed. The quiet time was perfect to catch up on your studies,

But that was five years ago. Now you’re working full time. You’re tired when you come home at night, looking forward to getting some rest. But instead of going to bed at a reasonable time, you stay up late reading or catching up on different things. Because you’re in the habit of staying up late, even though, you no longer need to.

Sometimes our habits outlive their original purpose. Unfortunately, most of us rarely question our habits to determine if they still work for us.

At the same time, one of the fastest ways to improve your life is to question your day to day habits. Do your habits support what you want out of life, or do they hold you back?

Set time aside to take a close look at your day-to-day habits. As much as you can, include habits from all areas of your life in your review.

2 – Identify:  Habits That No Longer Serve You

Once you’ve reviewed your habits, you will know which ones no longer contribute positively to your life. Those are the habits you want to let go of because they no longer benefit you.

Negative habits can hold you back and may prevent you from achieving your goals or dreams altogether.

For example, if you’re in the habit of procrastinating, decide to eliminate this habit. Because if you’re always running late or you’re not finishing projects, this alone could make or break your career. Resolve to eliminate the bad habit and replace it with a new, more productive one.

Now it’s time to replace your old, non-productive habit with one that serves you well. Be aware that removing a bad habit from your life may leave a void to be filled.

However, if you’re not prepared to fill that void with something positive, you may end up creating a habit worse than the one you’re replacing.

Let’s say it’s time to quit smoking; that’s a habit you want to get rid of for sure.

However, if you don’t have a positive habit to put in its place, you could pick up another bad habit, such as: eating too much, chewing gum excessively, or smoking vapor cigarettes.

So what can you do to avoid forming another bad habit?

Whatever it may be, pick something that will work for you.

At any rate, it’s possible to create new, positive habits.

Experts agree that most habits will take up to 21 days of repetition before becoming part of your behavior. Of course, some may take less or more time before becoming a habit.

A new, positive habit gets formed just like the old one did… through repetition. So commit to sticking to your new behavior, and before you know it you’ve created a new habit to support your goals.

Whenever you decide it’s time to install a new habit, make sure to be patient with yourself. Be gentle when things don’t go as planned.

Expect some setbacks along the way. Don’t get discouraged, but get back up and keep moving forward.

While you’re going through the “habit-change-process” remember to pat yourself on the back. And please don’t get upset with yourself when things don’t go as planned; it’s ok.

Focus on the positive changes you’re making, focus on your progress. And… don’t forget to reward yourself along the way.

By Johanna Hofmann, MBA; regular contributor to the NPBusiness blog and author of “Smart Business Planning for Clinicians.”