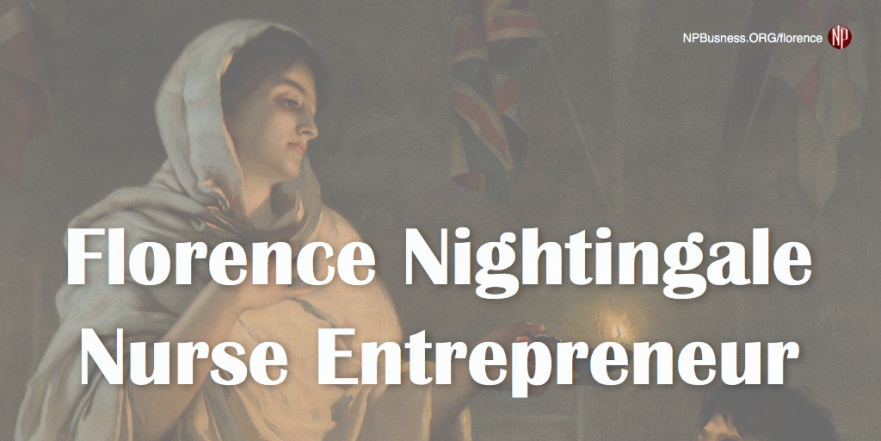 Florence Nightingale has many titles to her name. She has been known as the Lady of the Lamp and the Mother of Modern Nursing.

But entrepreneur? Really? Yes!  There is a thing or two still left to learn from Florence. Let’s look at her story.

October 1853, the start of the Crimean War. A brutal battle fought by an alliance of Britain, France, Turkey, and Sardinia against the Russian Empire.

As for Britain, thousands of its young men were sent to the front. Prepared to give their all, many young men wound up wounded and sick at the British hospital in Constantinople. Conditions in the hospital were deplorable… patients on stretchers piled into hallways, rats running freely throughout the building, rooms, and hallways filled with stench.

Early on, Florence Nightingale realized nursing was her calling. Against her parent’s wishes, she studied nursing at a hospital in Germany.

Upon her return to England, she worked as a nurse in a hospital. In recognition of her exceptional performance, she was promoted to superintendent within the first year. By organizing and restructuring resources she was able to improve hygiene practices and lower the death rates at the hospital.

In 1854 Nightingale reportedly was asked by the Secretary of War to organize a group of nurses; they were to care for the sick soldiers at the hospital in Constantinople.

Florence Nightingale pioneered a number of services designed to improve conditions and aid the healing process. How was Florence Nightingale able to accomplish all this?

She drew upon her entrepreneurial talents of organizing, structuring, persuading, and creating. She helped her “customers” and provided overwhelming value to them.

As you know, entrepreneurs are not just found in the “make money” arena. True entrepreneurs can be found in all walks of life, profit and non-profit alike.

An entrepreneur is a person who:

As for Florence Nightingale:

They create something different, something new out of the individual parts in front of everybody’s eyes.

Florence Nightingale, our “Lady with the Lamp”, was a pioneer and a dedicated nurse.

And, as odd it may sound, she had the mind and spirit of a true entrepreneur.

Image Credit: Wikimedia, The Lady with the Lamp, popular lithograph reproduction of a painting by Henrietta Rae, 1891